Lack of Global Convergence and the Formation of Multiple Welfare Clubs across Countries: An Unsupervised Machine Learning Approach 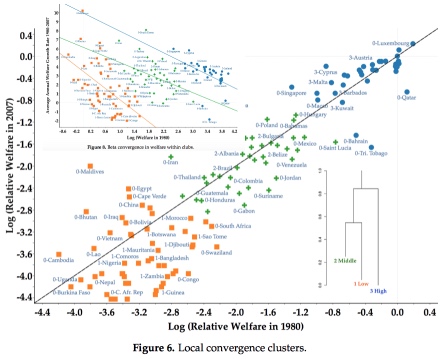 The cross-country convergence hypothesis is one of the central topics of long-run macroeconomics. This paper revisits this hypothesis in a context beyond GDP. It uses a novel welfare index that incorporates measures of consumption, leisure, life expectancy, and inequality. Based on a sample of 128 countries over the 1980–2007 period, the lack of global sigma and beta convergence is first documented. Next, the paper incorporates some recent developments from the unsupervised machine learning literature to evaluate the existence of local convergence. In particular, the application of a distribution-based clustering algorithm suggests the formation of three local convergence clubs. Under this classification, beta convergence is recovered for each club. However, only the core members of the richest club appear to be reducing their welfare differences in a way that is consistent with the strong notion of sigma convergence. Overall, these results re-emphasize the finding that beta convergence is necessary, but not sufficient for sigma convergence, even within convergence clubs and in a context beyond GDP.

Join our research and learning community